A snapshot only saves data blocks in the cloud disk that have been written to or modified. Therefore, the size of the snapshot is smaller than the source cloud disk.
See below for more details:

Tencent Cloud snapshots use an incremental snapshot mechanism. When you continuously create multiple snapshots of the same cloud disk, only the first snapshot is a full snapshot, and subsequent snapshots only contain data that has been modified relative to the previous snapshot (incremental snapshot). This can minimize the total storage capacity occupied when users continuously create snapshots, reducing user costs.
For example: Assume a cloud disk has three data blocks, A, B, and C. You make snapshots at 10:00, 11:00, and 12:00 respectively. Changes of data blocks on the disk between these points in time are shown in the following figure, and each snapshot should save the following data: 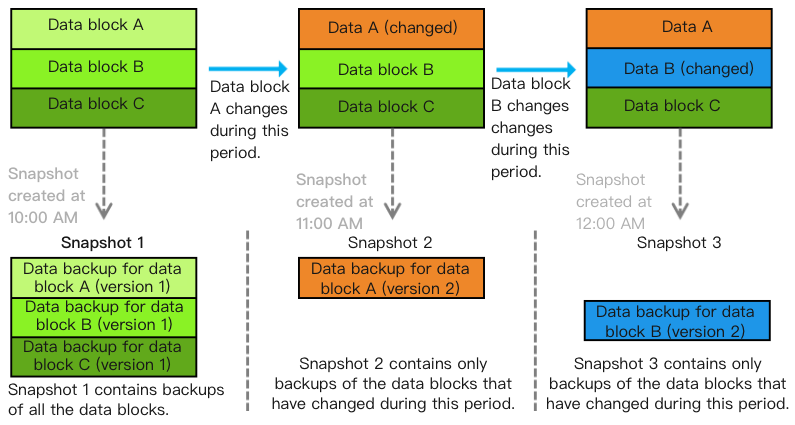 Rolling Back with Incremental Snapshots

Based on the previous example, when you use Snapshot 3 to perform data rollback, the system will merge the data in Snapshot 1, Snapshot 2, and Snapshot 3. If there is a data block in the same location, data in the newest snapshot will be taken. During final rollback, the merged data will be written to the cloud disk to be rolled back.
Incremental snapshot rollback process is as shown in the following figure: 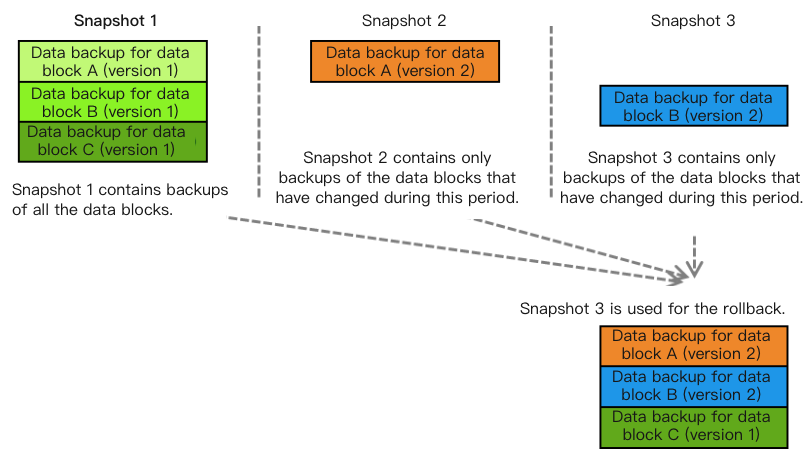 Based on the previous example, if you delete Snapshot 1, the system will merge Snapshot 1 and Snapshot 2, and will use Snapshot 2’s data to overwrite Snapshot 1’s data in the same location. After merging, Snapshot 2 is the new full snapshot.
Incremental snapshot deletion process is as shown in the following figure: