DeScheduler is a TKE rescheduling add-on based on actual node loads. It is implemented based on the Descheduler for Kubernetes. After being installed in a TKE cluster, this add-on will work with the kube-scheduler to monitor the high-load nodes in the cluster in real time and drain low-priority Pods. We recommend you use it together with the TKE Dynamic Scheduler to comprehensively guarantee cluster load balancing.
This add-on relies on the Prometheus add-on and rule configuration. We recommend you read Deploying dependencies carefully before installing it; otherwise, it may not work properly.

Kubernetes objects deployed in a cluster

The DeScheduler addresses the unreasonable running of existing nodes in the cluster through rescheduling. The policy of the community Descheduler is implemented based on the data on the API server, but not actual node loads. Therefore, the policy can be adjusted to rescheduling based on actual loads by monitoring nodes.

TKE's ReduceHighLoadNode policy relies on Prometheus and Node Exporter monitoring data. Pods are drained and rescheduled based on node metrics such as CPU utilization, memory utilization, network I/O, and system loadavg, thereby avoiding extreme node loads. The ReduceHighLoadNode of the DeScheduler needs to be used together with the Dynamic Scheduler's policy based on actual node loads.

The DeScheduler is based on the rescheduling concept of the community Descheduler to scan for running Pods on each node that are not in line with the policy and drain them for rescheduling. The community Descheduler provides some of the policies based on the data on the API server, for example, the LowNodeUtilization policy that relies on the request and limit values of the Pod. The data can effectively balance the cluster resource allocation and avoid resource fragmentation. However, the community policy lacks the support for the occupation of actual node resources. Specifically, if the same number of resources are allocated from node A and node B, their peak loads will differ significantly due to differences in CPU and memory usage during actual Pod running.

Therefore, TKE has released the DeScheduler, which monitors the actual node loads at the underlying layer for rescheduling. With node load statistics of the cluster from Prometheus and the configured load threshold, it regularly executes the check rules in the policy and drains Pods from high-load nodes. 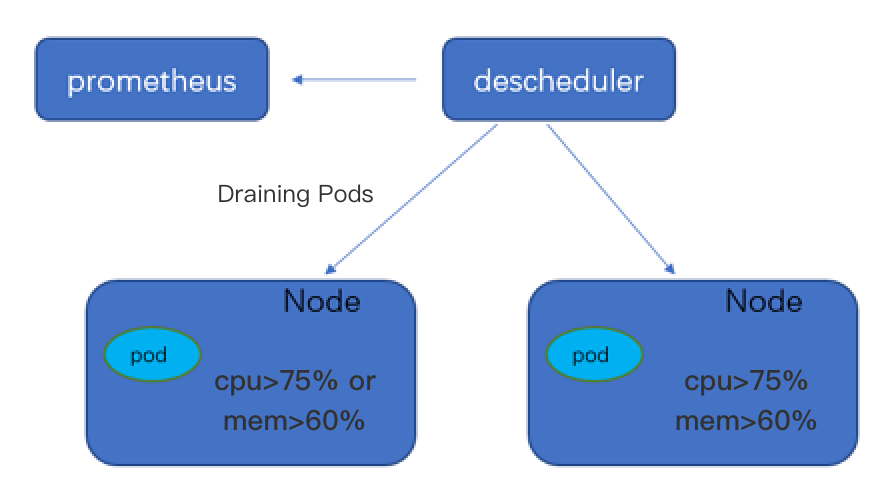 To ensure that the required monitoring data can be pulled by the add-on and the scheduling policy can take effect, follow the "Configuring the Prometheus file" step in Deploying dependencies to configure the monitoring data collection rules.

A default value has been set for the load threshold parameter. If you have no special requirements, you can directly use it.

If the average CPU or memory utilization of the node in the past five minutes exceeds the configured threshold, the Descheduler will identify the node as a high-load node, execute the logic to drain and reschedule Pods to reduce the load below the target utilization.

The DeScheduler add-on relies on the actual node loads in the current and past periods of time to make scheduling decisions. It needs to get the information of the actual node loads of the system through the Prometheus add-on. Before using the DeScheduler add-on, you can use the self-built Prometheus monitoring service or the TKE cloud native monitoring service.

Deploying the Node Exporter and Prometheus