Dynamic Scheduler is an add-on provided by TKE for pre-selection and preferential selection based on actual node loads. It is implemented based on the native Kube-scheduler Extender mechanism of Kubernetes. After you install it in a TKE cluster, this add-on will work with Kube-scheduler to effectively prevent node load imbalances caused by the native scheduler through the request and limit scheduling mechanisms.
This add-on relies on the Prometheus monitoring component and configuration of relevant rules. Before installing this add-on, we recommend you carefully read Dependency Deployment to prevent problems with the add-on.

Kubernetes objects deployed in a cluster

In most cases, the Kubernetes native scheduler performs scheduling based on the pod request resources, without considering the actual load of nodes at the current time and over a previous period. Consequently, the following problem may occur:
In some nodes of the cluster, the amount of remaining schedulable resources (calculated based on the request and limit of the pods running on nodes) may be large but the actual load is high. In contrast, in other nodes, the amount of remaining schedulable resources may be low but the actual load is low. In some cases like this, Kube-scheduler preferentially schedules pods to nodes with more remaining resources (according to the LeastRequestedPriority policy).

As shown in the figure below, Kube-Scheduler will schedule pods to Node2, when it is clear that scheduling pods to Node1 (with a lower load level) is a better choice. 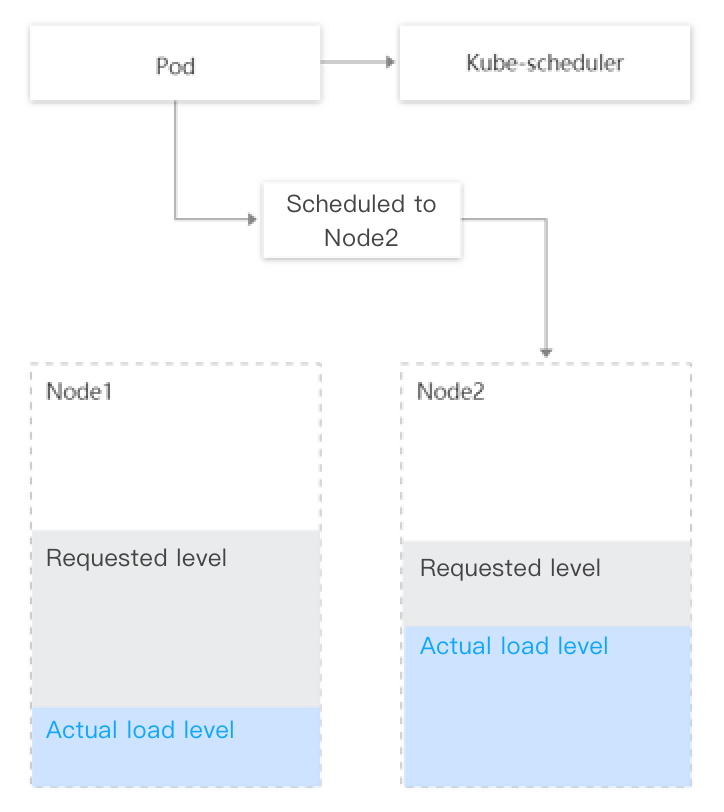 To prevent large numbers of pods from being continuously scheduled to low-load nodes, Dynamic Scheduler sets the scheduling hotspot-prevention policy, which calculates the number of pods scheduled to each node within the past few minutes and deducts points from the preferential selection scores of nodes accordingly.
The current policy is as follows:

Based on the scheduler extender mechanism, Dynamic Scheduler obtains node load data from the Prometheus monitoring data, develops scheduling policies based on the actual load of nodes, and intervenes during pre-selection and preferential selection to preferentially schedule pods to low-load nodes. This add-on consists of node-annotator and dynamic-scheduler.

node-annotator regularly pulls node load metrics from monitoring data and synchronizes them to the node annotation, as shown in the figure below:

After the addon is deleted, the annotation generated by the node-annotator will not be automatically deleted. You can manually delete it as needed.

Dynamic-scheduler is a scheduler-extender that performs filtering and score calculation based on the load data in the node annotation during pre-selection and preferential selection of nodes.

To prevent pods from being scheduled to high-load nodes, you need to filter out some high-load nodes through pre-selection (the filtering policy and proportion can be dynamically configured; for more information, see Add-on Parameter Description).
As shown in the figure below, the load of Node2 in the past 5 minutes and the load of Node3 in the past hour both exceed the corresponding thresholds, so both nodes will be excluded from subsequent preferential selection.

At the same time, to balance the loads among nodes, Dynamic-Scheduler scores each node based on its load data. The lower the load, the higher the score.
As shown in the figure below, the score of Node1 is the highest, so pods will be preferentially scheduled to Node1 (the scoring policy and weights can be dynamically configured; for more information, see Add-on Parameter Description).

2. Copy the configuration of rules to a file (such as dynamic-scheduler.yaml), place the file under /etc/prometheus/rules/ of the above Prometheus container.
3. Reload Prometheus server to obtain the metrics needed by Dynamic Scheduler from Prometheus.