As live streaming has become ubiquitous, more and more enterprises and developers are building their own live streaming platforms. During the process, they need to handle complex requirements such as live stream push and pull, live chat room, live room interaction (like, gift, and co-anchoring), and live room status management. This document takes Tencent Cloud products (IM, TRTC, and CSS) as examples to describe how to implement a live room, along with possible problems and considerations, giving a glimpse of the live streaming business and requirements.

To set up a live room in Tencent Cloud, you need to create an IM application in the console as shown below:

Creating a TRTC or CSS application

In addition to IM features, a live room also relies on the live streaming feature, which can be implemented with TRTC or CSS. After creating an IM application, you can activate a TRTC application as shown below:

To use CSS, you can enable stream push and playback domain names as shown below:

The application created during the preparations is the Free edition, which applies only to development. In the production environment, you need to activate the Pro or Ultimate edition as needed. For more information on differences between different editions, see Pricing.

In live streaming scenarios, you need some extra configurations after creating the application.

Calculating the UserSig with a key

In the IM account system, the password required by a user login is calculated by the server with a key provided by IM. For more information, see Generating UserSig. In the development phase, to avoid holding back development on the client, you can also calculate the UserSig in the console as shown below:

During live streaming, an admin may need to send messages to a live room and mute (remove) non-compliant users, which can be done through IM server APIs. To call these APIs, you need to create an IM admin account. By default, IM provides an account with the UserID of administrator. You can also create multiple admin accounts as needed. Note that you can create up to five admin accounts.

To implement lucky draws based on on-screen comments, message statistics collection, sensitive content detection, and other requirements, you need to use the IM callback module, where the IM backend calls back the business backend in certain scenarios. You only need to provide an HTTP API and configure it in the Callback configuration module in the console as shown below: 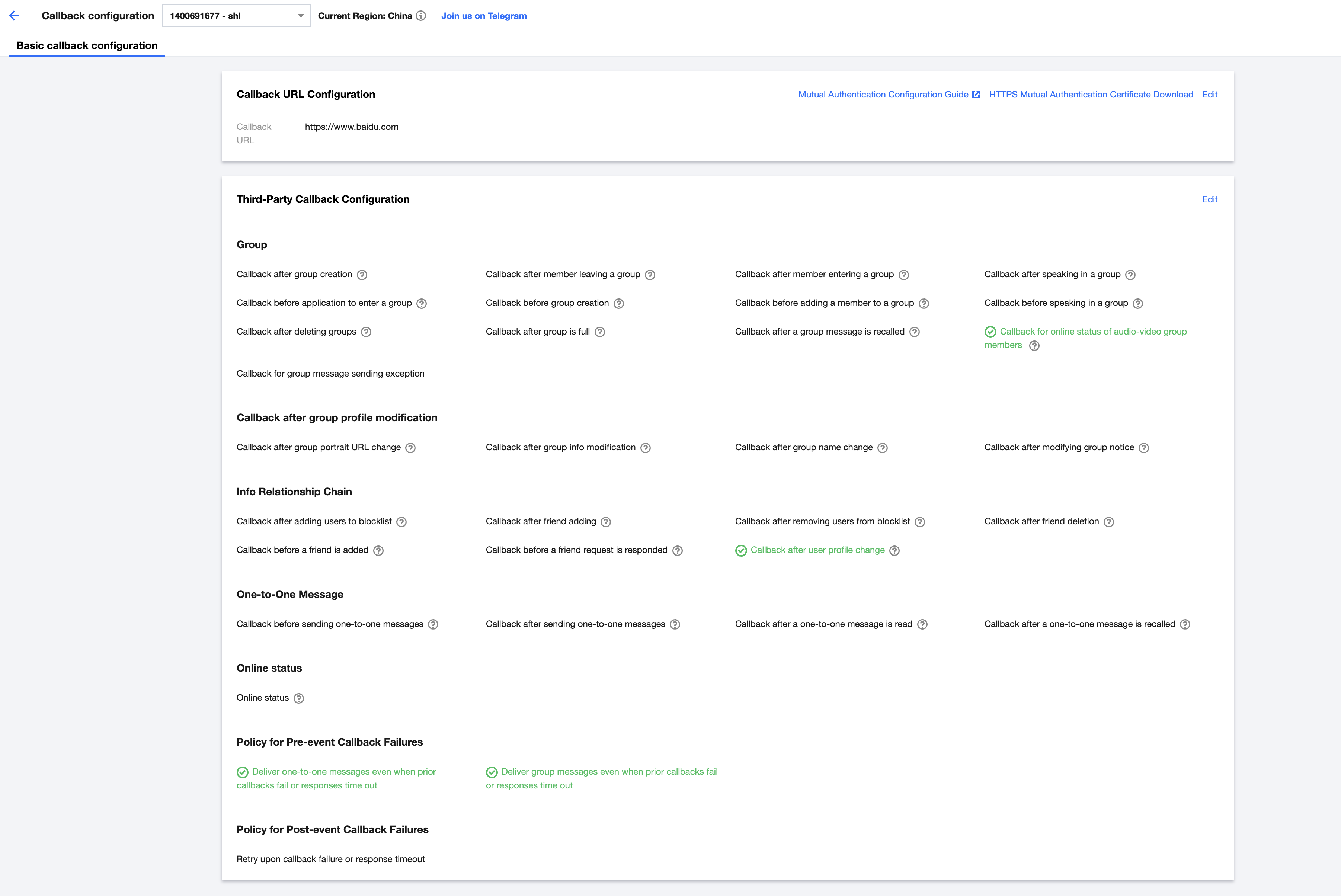 After completing the preparations, you need to integrate the IM and TRTC client SDKs into your project. You can select different integration options as needed. For detailed directions, see TUIKit Introduction.

The following describes common features in a live room and provides best practices with implementation code.

A live room has the following statuses:

Two implementation schemes are provided, and their pros and cons are as analyzed below.

Based on the analysis above, we recommend you combine the two schemes to maintain the live room status:

The user chat section in live streaming scenarios has the following characteristics:

Therefore, you can select audio-video groups (AVChatRoom) as the Group type for the live room based on the group characteristics of IM.

The live room notice (topic) is necessary for each live room and can be seen by users after entering the room. In addition, audio-video group members need to be notified of notice changes in real time. You can store the live room notice on the business backend or in the IM group profile, just like the live room status; however, there are some additional things that require your attention:

A live room features a large number of user messages. Each user may frequently send messages. When the number of messages sent reaches the IM frequency control threshold, the IM backend will discard some messages to ensure the system running stability. It's necessary to apply such a threshold, as messages are less readable when the client receives too many of them.

Group messages have three priorities, and the backend delivers high-priority messages first. Therefore, set different priorities for messages based on their importance.
The following lists the priorities from high to low:

Therefore, it's necessary to set message priorities for a live room.

Live room messages are prioritized based on their importance as follows:

Identity and level of a live room user

The concept of user level applies to most of the live rooms. You can determine a weighted user level based on the following:

For online duration and the number of messages, you need to use the IM callbacks, which can be configured as instructed in the preparations. Callbacks in the console are as shown below:

The flowchart for information collection is as shown below:

Sample data of the callback after sending a message:

You can identify ordinary, like, and gift messages based on the message type in MsgBody. For more information on all the fields, see Callback After Sending a Group Message.

Sample data of the callback for the change of the user online status:

You can identify the user online status based on the field in Info, so as to count the online duration. For more information on all the fields, see State Change Callbacks.

In addition, live room popularity is often displayed and used as a criterion for live room recommendation. It is determined in a similar way to user level and can be implemented through the callback system of IM.

Historical messages in a live room

Historical messages are not stored by default for audio-video groups (AVChatRoom). When a new user enters the live room, the user can only see messages sent after the entry. To optimize the user experience, you can configure the number of historical messages that can be pulled as shown below:

This feature is available only for the Ultimate edition, and up to 20 historical messages in the past 24 hours can be pulled.

Historical messages in audio-video groups are pulled in the same way as others. Sample code:

Number of online users in a live room

Displaying the number of online users in a live room is a common feature. There are two implementation schemes, each with pros and cons.

Your server can send the message of online user count statistics to the client in a scheduled manner, for example, once every five seconds. However, this will incur extra network overheads if the number of online users in the live room doesn't change sharply. We recommend you update the number by monitoring its change rate.

You can determine the priority of the accuracy and real-timeness of the number of online users in the live room as needed.

Muting a user in a live room

In a live room, you can mute all or a specified user in different scenarios.

When the live room admin sets group muting on the backend, the client should put the input box of the target user in the disabled status after receiving the callback event; otherwise, the user will receive the message sending failure prompt when sending a message. After the user is unmuted, the client should also put the input box in the enabled status.

Callback code on the client:

Note that the change of the group member muting status will not be delivered to the client by default and needs to be configured in the console.

Currently, audio-video groups (AVChatRoom) don't support delivering the notification of profile change, but you can send custom messages for implementation.

Removing a user from a live room

Similar to muting users in a live room, you can use a server API to remove a user from a live room. As audio-video groups (AVChatRoom) don't support this API, you need another implementation scheme.

Below is the scheme:

Configuration items in the console are as shown below:

Filtering the sensitive content in a live room is another important feature, which can be implemented as follows:

Sample data of the callback before sending a message:

You can identify the message type based on the MsgType field in MsgBody. For more information on the fields, see Callback Before Sending a Group Message.

You can choose to handle a non-compliant message in a specific way, which can be implemented through the data packet in the callback returned to the IM backend.

You can use them as needed.

The flowchart for detecting sensitive content is as shown below: 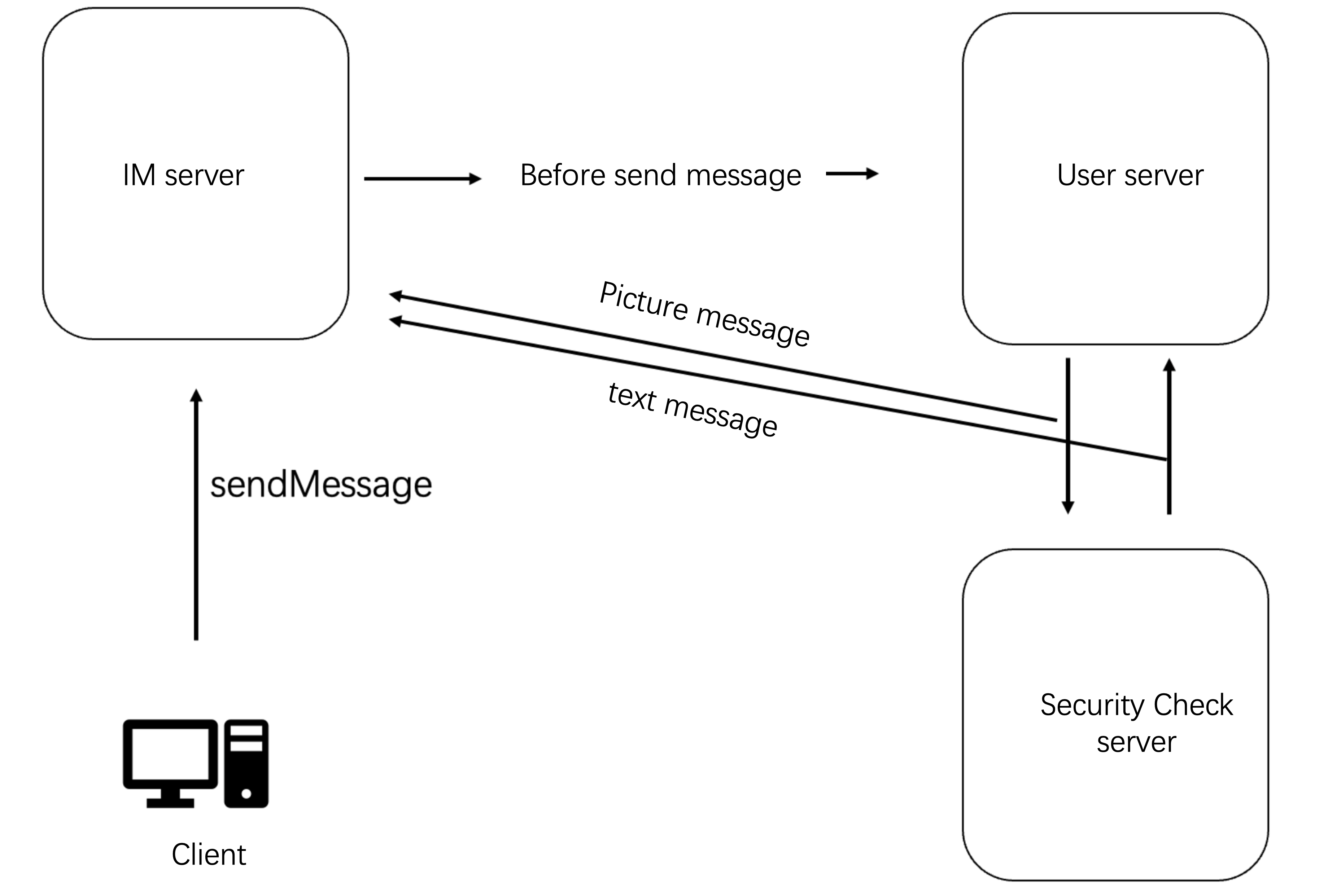 You can call the getGroupMemberList API to get the list of online group members in a live room for display. As an audio-video group (AVChatRoom) has a large number of members, the feature of pulling the list of all the members is unavailable. The Ultimate edition and non-Ultimate edition differ in settings:

The configuration in the console is as shown below:

If you are a non-Ultimate edition user, you can maintain the list of online group members on the client through getGroupMemberList and the onGroupMemberEnter and onGroupMemberQuit callbacks of the group listening. However, after users leave and re-enter the live room, only the latest 30 group members can be pulled.

Lucky draw based on on-screen comments in a live room

Similar to message statistics, lucky draws in live streaming also require the callback after sending a message. Specifically, the message content is detected, and users that hit the keywords of a lucky draw are added to the pool.

Broadcast in a live room

The broadcast feature is similar to a system notice feature in the live room, but it differs from the latter in that it belongs to messaging. When the system admin delivers a broadcast message, all the live rooms under the SDKAppID will receive it.

The broadcast feature is currently available only for the Ultimate edition and needs to be enabled in the console.

If you are not an Ultimate edition user, you can implement the feature by sending a custom group message on the server.

1. What should I do to display the nickname and profile photo on the UI when the message sending status, Message.nick, and Message.avatar fields are empty during message sending?

Call the getUserInfo API to get the Message.nick and Message.avatar fields in the user's information and use them as the fields for message sending.

2. How should I choose between TRTC and CSS?

Live streaming in TRTC features a low latency to facilitate interaction with the anchor, but it's expensive. CSS is cheap but has a high latency.

3. Why are messages lost?

Possible causes include the following:

If the problem persists, submit a ticket for assistance.

4. Is there an open-source live streaming component that allows for video watching and chatting?

Yes, and its code is open source. For more information, see TWebLive.